My 2013 Blog on the sale of the "Kingston Flyer" tourist steam train (which incidentally has still not yet sold) prompted me to go back through my collection of railway related photographs which I took in Southland and Otago in the South Island of New Zealand through the early to mid 1980's.

I do appreciate that this Blog will have a narrow focus of interest for many readers. But these images emphasize how much has been swept away, not only by line closures but also by rationalisation and modernisation of operating procedures and infrastructure in the name of efficiency, and reducing costs and maintenance. A considerable number of Internet searchers find images my Blog via Google and other Search Engines. So these photographs, which are now over 30 years old, may prove interesting. And while much of what we see here had remained for over 100 years, the 1990's brought a much changed railway landscape. Almost all of what you see is no more. If it still exists I have noted this.

I do apologise for the lack of "trains on tracks" or people in these views. I took them at the time to preserve something of this heritage for myself rather than others as I knew their days were numbered.

Clinton became was for very many years a busy refreshment stop for passenger trains, hence the long platform. Passengers would pile out of their trains and make a dash for the refreshment room, taking their tea in thick railway monogrammed crockery cups, pies, sandwiches, buns and cakes back onto the train. Service thus had to be quick. The station became, after the introduction of the diesel hauled Southerner Express in December 1970, along with on-board catering, merely a shadow of its former self, acting only as a brief passenger stop. All you see, including the goods shed with its distinctive curved roof, is gone.

The Tapanui branch line from Waipahi closed in 1978 after major flood damage. This typical New Zealand Railways wooden truss bridge on stone piers spanning the Pomakaka River inexplicably survived after closure and subsequent lifting of the line. I believe it can still be seen today on Pomahaka Road about 400 metres north of the turn-off to Conical Hill Road.

A large number of old locomotives and tenders, comprising of V, P, K and even one early J Class, were dumped at Oporo by the Oreti River on the branch line through to Thornbury in 1927. At a time when scrap iron prices were obviously low, these venerable but now non-standard and generally worn out old 19th century locomotives were tipped over the edge of the line by the Oreti River to act as flood protection for the railway embankment. A number of locomotives and tenders plus spare parts from others have been subsequently recovered, including the restored - and now world renowned - American built Rogers locomotive K88 "Washington" of 1877 vintage and the unrestored Rogers K94 of 1878. Contracting work undertaken to stabilise the bank after these photos were taken covered over many of the remains. I can recall that there was evidence of cuts in metal and boilers of an indeterminate date, possibly removing white metal and copper or anything salvageable that could be sold to a scrap metal dealer. Another locomotive dump exists beside the Oreti River at Mararoa Junction but only a few pieces of unidentified metal were visible above ground when I visited the site about 1982.

This station retained a Station Master until closure but sadly freight volumes had dropped significantly over the previous few years. 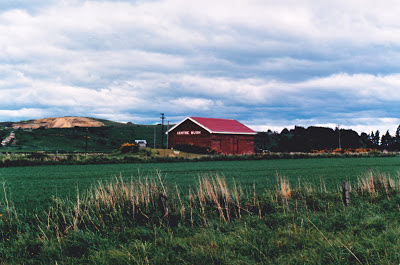 This goods shed remains standing but is sadly continuing to deteriorate badly.

This had been a combined road and rail bridge across the Oreti River and enabled the Mossburn line to cross the Oreti River. The Mararoa locomotive dump was located very close nearby but there is now very little to see above ground. This distinctive and once very common type of wooden bridge was swept away after a new double lane concrete bridge was built, the Mossburn to Mararoa Junction branch line having already closed, 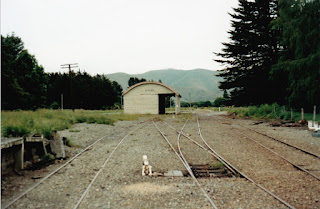 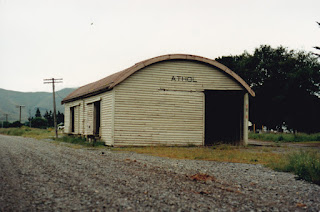 The distinctive sloping roof, as at Athol and many other stations and wayside halts, assisted when there were heavy snowfalls.


Kingston Branch Railway, circa 1982
(after closure) 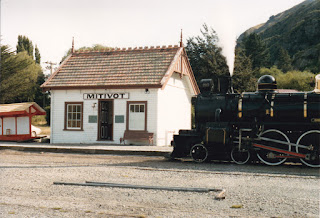 This is the replacement Kingston Railway Station, being part of the Riversdale Railway Station and moved here to be ready for the opening of the new "Kingston Flyer" tourist steam train in 1970. The station had been temporarily re-named for filming of a French automobile advertisement.

Steam locomotive AB795, having been built at Hillside Workshops in Dunedin in 1927, has just rolled into view. This locomotive, along with AB778, formed part of the newly formed "Kingston Flyer" heritage train running the 60 kilometres between Lumsden and Kingston in Central Southland. Since 1982 the "Kingston Flyer" has only run the 14 kilometres between Kingston and Fairlight but since 2012 has been mothballed and is currently for sale for NZD$2.5 million which includes the rail corridor and associated land and buildings [Link Here]. The last privately run operation proved uneconomic and it may well be that the local Council will sadly have to remove a heritage order preventing the train from being removed and operating elsewhere.

American Rogers Locomotive Works K92, built in 1878 and having been exhumed from the Mararoa Junction locomotive dump by the Oreti River where it had been dumped in 1928, is now owned by the Waimea Plains Railway at Mandeville. Although its boiler ticket has now expired it had quite amazingly used the original pre-dump boiler dating to the early 1900's, a new boiler will most likely now be required. As opposed to the rather "flashy" restored American Rogers K88 of 1878 it has been restored to its circa 1910 guise which affords a rather interesting comparison.

A "Grass Grub" and Baggage Car
at Christchurch Railway Station, circa 1982

The railway station itself, although then used for other purposes, suffered serious earthquake damage in 2012 and parts of it have been demolished. The tower, which remains a Christchurch icon has been externally reinforced in order to support it due to cracking.

A "Grass Grub" at Otira on the West Coast Line

- All images are from my own collection and may be freely copied for non-commercial use provided a link is given back to this site. I still hold the original 35mm negatives and it may be possible to obtain higher resolution copies.