Continuing from Part One of my Blog, I am pleased to show you a further selection of Edwardian and pre World War One Christmas and New Years Greeting cards. That they have survived close to 100 years is testimony to their beauty and sentimental value. Some were sent from Scottish friends and relatives to my family after emigrating to New Zealand, hence the references to "far away", "remembrance" and "memories".

Most of these cards are chromolithographic prints on a form of opaque plastic material. These are either tied to a card by ribbon or sewed on. Some state "Printed in Bavaria" on the reverse. 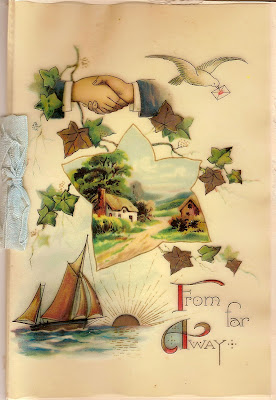 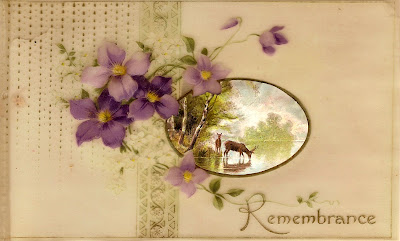 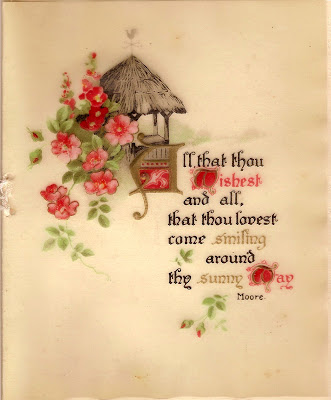 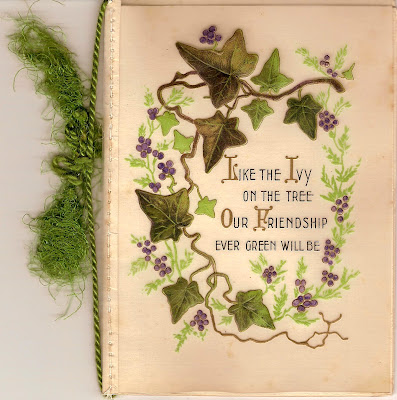 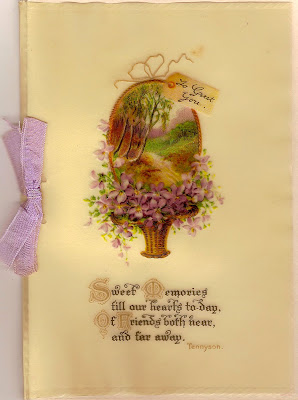 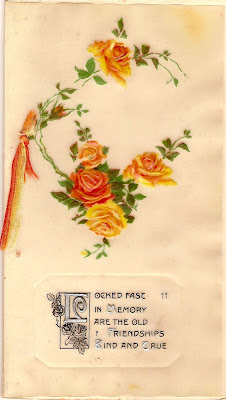 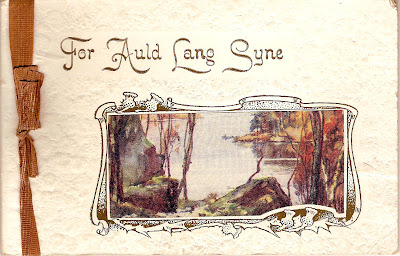 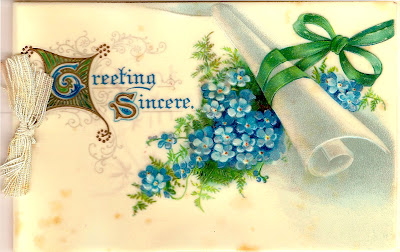 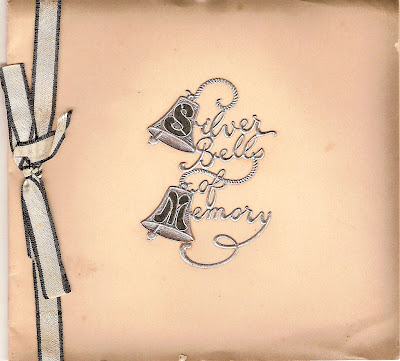 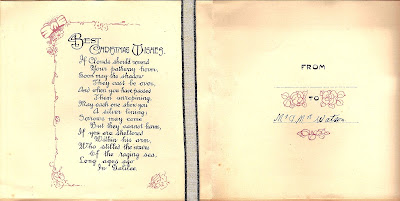 
That eternal and confusing puzzle, is "tea" just a drink or a full meal? The exact meaning of "tea", whether just tea and light refreshments or in fact a full meal, varies considerably depending on which part of Britain or parts of the former British Empire you live in or your forbears were from. "Tea" in the north of England, Wales and Scotland typically referred to a full meal, historically taken about 5pm. Were it to be just tea and refreshments that would commonly be referred to as "Morning Tea" or "Afternoon Tea". A light "Supper" of tea with cake or biscuits might be served about 9pm or later.

In the south "Tea" would normally refer to Afternoon Tea served anytime between 2pm and 5pm, being a cup of tea with refreshments such as sandwiches, biscuits, or cake. The term "High Tea" referred to a slightly more substantial meal, taken between 5pm and 7pm while "Dinner", a full cooked meal, would normally have been served about 9pm. With the advent of Afternoon Tea in the mid 19th century, "High Tea" at 5pm was slowly replaced with "Dinner", now being served between 7pm and 8.30pm.

Anna Maria Russell, Duchess of Bedford, a lifelong friend of Queen Victoria and a Lady of the Bedchamber between 1837 and 1841, was also the originator of "Afternoon Tea".  An extra meal called "luncheon" had been created to fill the midday gap between breakfast and dinner, but as this new meal was very light, the long afternoon with no refreshment left the Duchess - and others - feeling hungry. The Duchess found a light refreshment of tea and small cakes or sandwiches counteracted that late afternoon "sinking feeling" and soon began inviting her friends to join her at Woburn Abbey for this repast. Thus the "ritual" of afternoon tea "quickly became an established and convivial repast in many middle and upper class households".


The afternoon tea menu consisted mainly of small cakes, bread and butter sandwiches, assorted sweets, and, of course, tea. The Duchess continued this custom when she returned to her London residence, sending cards to her friends asking them to join her for "tea".  The practice of inviting friends to visit for tea in the afternoon was quickly picked up by other social hostesses.


Queen Victoria is reported to have quickly taken to this new custom, hosting daily formal dress afternoon tea parties which always ended before 7pm in order to give everyone time to change and be ready for dinner at 9 pm. An oft quoted but quite possibly apocryphal story avowes that "Queen Victoria, a notorious tea fanatic, was given to flinging her tea cup across the room if she found the tea not up to her standards"!


Her Granddaughter, Princess Alice The Countess of Athlone, related that Queen Victoria enjoyed almost daily carriage outings in all weathers "to take the air" including enjoying family picnics. She never minded the weather, often to the chagrin of those accompanying her. Servants accompanying the Royal party would light a fire to boil water for tea which would be served to Queen Victoria while she remained comfortably seated in her carriage.

Due to Queen Victoria's popular connection with tea drinking, there are many examples evident of that royal connection, even today, such as tea blends that she may have favoured to a myriad of period souvenir and commemorative tea cups, saucers and other ephemera connected with tea drinking.


Queen Victoria's favourite tea is recorded as Earl Grey tea, a China black tea infused with Oil of Bergamot, and served with her favourite shortbread biscuits. Earl Grey tea, taken without milk but accompanied with a slice of lemon, is today particularly favoured by HM Queen Elizabeth II.


"We are not amused" are the oft quoted words of Queen Victoria. But the Countess of Athlone confirmed of her Grandmother, "Dear old thing, well she nearly died of laughter". So, while the daily ritual of afternoon tea appears to have wained somewhat in today's busy world, there is still something satisfyingly indulgent and sociable about sitting down to a convivial conversation - or gossip - over a leisurely cup of tea and a slice of cake. Queen Victoria would definitely approve.

A Gallery of Edwardian Christmas Cards (Part One)

Christmas cards were first commercially produced in 1843 by Henry Cole, then gaining in popularity amongst the upper and middle classes of mid Victorian era Britain. The introduction of cheap postage in the 1870's led to a dramatic increase in the sending of cards. Therefore by the Edwardian era, and with the introduction of mass produced and inexpensive colour lithographic postcards, the giving and receiving of Christmas cards had become a well established and popular custom amongst all classes of society.


A traditionally styled Christmas card featuring Santa Claus, a verse, and a sprig of holly. The personage of "Father Christmas", "a jolly well-nourished bearded man dressed in a long, green, fur-lined robe", has in fact been a British custom since the 17th century.

This sepia toned card by Valentines makes use of Walter Dendy Sadler's 1880 painting of Franciscan Friars fishing. The "Thursday" plus the fishing theme relates to the fact that the Friars were forbidden to eat meat on Fridays.

A Scottish Christmas card featuring two doves and a dovecot along with a sweet but now rather contrived verse.


A chromolithographic Christmas  postcard printed by Meissner& Buck of Leipzig and featuring swans at Rudgwick in Surrey. The Land or Province of Saxony in Germany was at this time a major centre of the chromolithography industry, especially for the the British postcard market. This all ended in 1914 with the outbreak of "The Great War".


An attractive Christmas card featured in my blog of "Edwardian beauties". Unusually this sepia card has been delicately hand-tinted. 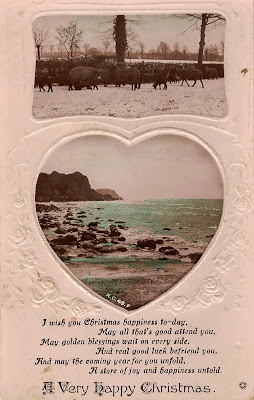 This glossy card features the use of actual photographs which have been tinted to increase their visual effectiveness.

An Edwardian Christmas card of a view overlooking Queenstown on Lake Wakatipu New Zealand. The publisher has made use of a stock tourist card printed in Saxony Germany with an overprinted Christmas greeting.

Another stock tourist card which has been utilised as a Christmas card by overprinting. As is still the case today, tourist views were frequently used in the Edwardian era as Christmas cards, especially for friends and family back in "The Old Country" [Great Britain], as was the case in both examples above.

A photograph of a young Maōri maiden has been used in this chromolithographic card from New Zealand. Maōri images and themes were common in cards for relatives and friends back in "The Old Country", giving them an often highly romanticised but no doubt fascinating glimpse of indigenous New Zealand culture.